I think we all can agree that Malaysians love to eat. When it comes to eating, we want to try all kinds of food and when we’re travelling, we gotta seize the chance to try their local food as well. Do you really know what are the must-eat local food in Australia and where to eat them? If you’re unfamiliar with Australia, I bet this is a tough question to answer. Fret not, I’ve done the homework for you so you don’t have to! Just remember to bookmark this page and refer back to this list when you want to visit Australia!

Barbecued snag is a popular Australian dish that consists of a sausage that is grilled on a barbecue and then dipped in tomato sauce. It is important to note that a snag is not just any sausage. A snag is a type of sausage that is traditionally cooked on a barbecue. Barbecue snags are typically made from beef or pork, with garlic and onion. Sausages are an important part of the local cuisine in many countries, but the barbecued snags are unique to Australia.

Where to eat great barbecued snag:

Aussie meat pies are a popular dish in Australia due to its versatility. The traditional Australian meat pie is hand-sized, measuring around 3 inches in diameter and has a thick, flaky crust. It is usually filled with minced beef meat and gravy, with a generous topping of tomato sauce.

You will see Aussies enjoying these savory meat pies at every occasion at any time of the day like house parties, holiday celebrations, sports events or just a regular snack.

Where to eat great meat pies:

The lamington, as known as the “National Cake of Australia”, is a square-shaped butter sponge cake covered in chocolate sauce and dipped in desiccated coconut. To spice things up, some lamingtons were cut into half and cream or jam were spread in the middle. These are known as Jam and Cream Lamingtons. As it is covered with shredded coconut, the chocolate sauce tends to last longer in the heat. This made it a perfect choice to be made for fundraisers.

Where to eat great Lamingtons: 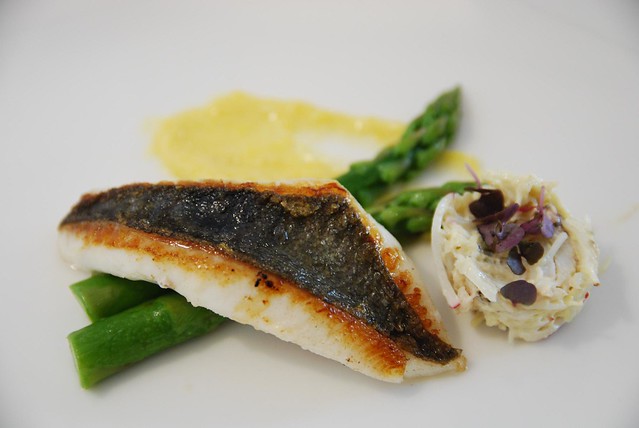 A lot of the main cities in Australia like Sydney, Perth and Melbourne are along the coastal shores and thus have access to fresh seafood and produce from the sea. Tasmania in particular are known for their abalone. This is why seafood is a popular choice in local cuisine.

Try checking out the city fish markets to see what they have to offer. FYI, Sydney Fish Market is the world’s third largest fish market!

Where to eat great and fresh seafood:

Chicken parmigiana is a classic Italian sounding American dish that has stolen the heart of Aussies. It’s one of the most ordered dishes at cafes and restaurants in Australia!

The Australian version of the dish typically consists of a lightly crumbed chicken breast, topped with tomato sauce (napoli sauce) and melted mozzarella cheese. A perfect combination. It is typically served with chips and salad.

Where to eat great Chicken Parmigiana:

Pavlova is a meringue-based dessert that was named after the Russian ballet dancer, Anna Pavlova.

The summer dessert consists of a crisp crust of baked meringue, which encloses a soft marshmallow-like interior. It is traditionally topped with whipped cream and fresh fruits, such as kiwifruit, passionfruit or strawberries.

Where to eat great Pavlova: 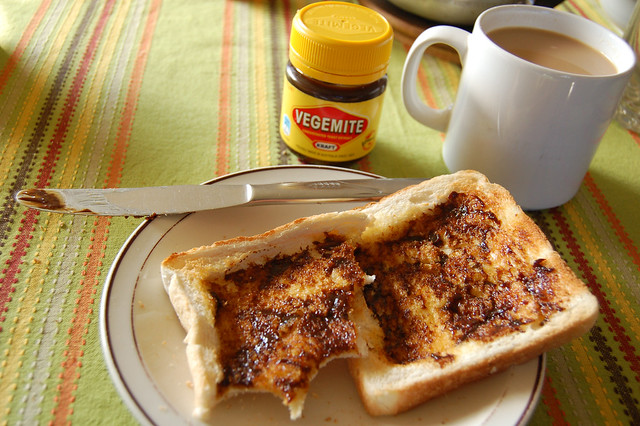 If you want to try authentic Australian breakfast food, you’ve gotta try Vegemite on toast at least once in a lifetime. A more savory version of the Marmite, Vegemite is made from leftover brewers’ yeast extract, spices, and vegetable additives. Vegemite on toast is made of a thin spread of Vegemite and a generous layer of butter on toasted bread.

Make it yourself by following this recipe: https://www.food.com/recipe/vegemite-on-toast-204570

Kangaroo meat is a healthy meat that has been consumed by the Australian people for centuries. It has more protein, less fat and fewer calories than beef. It also contains more iron than beef, chicken, or pork.

The kangaroo population in Australia is not endangered and the meat is more sustainable compared to other meats. They can get by on eating a variety of indigenous scrub and do not rely on the production of grain.

Some people might be concerned about the taste of kangaroo meat but it tastes just like beef!

Where to eat Kangaroo meat in Australia:

9. Other notable Australian snacks that you can get from supermarkets

Did you all knew about these popular Australian food before reading this article and have you tried any of them? Let me know which one is your favorite!

If you’re planning your trip to Australia and need help in trip planning, Sedunia Travel can be your go-to travel agency. They have ready-to-go packages here: https://sedunia.com.my/australia and they also customize an itinerary based on your needs, help you do flight bookings and arrange Muslim-friendly tour packages.